Federal Stimulus from the County Perspective: What’s In and What’s Out

After months of negotiation, Congress finally struck a deal on a COVID-19 relief package, but it leaves counties out in the cold. 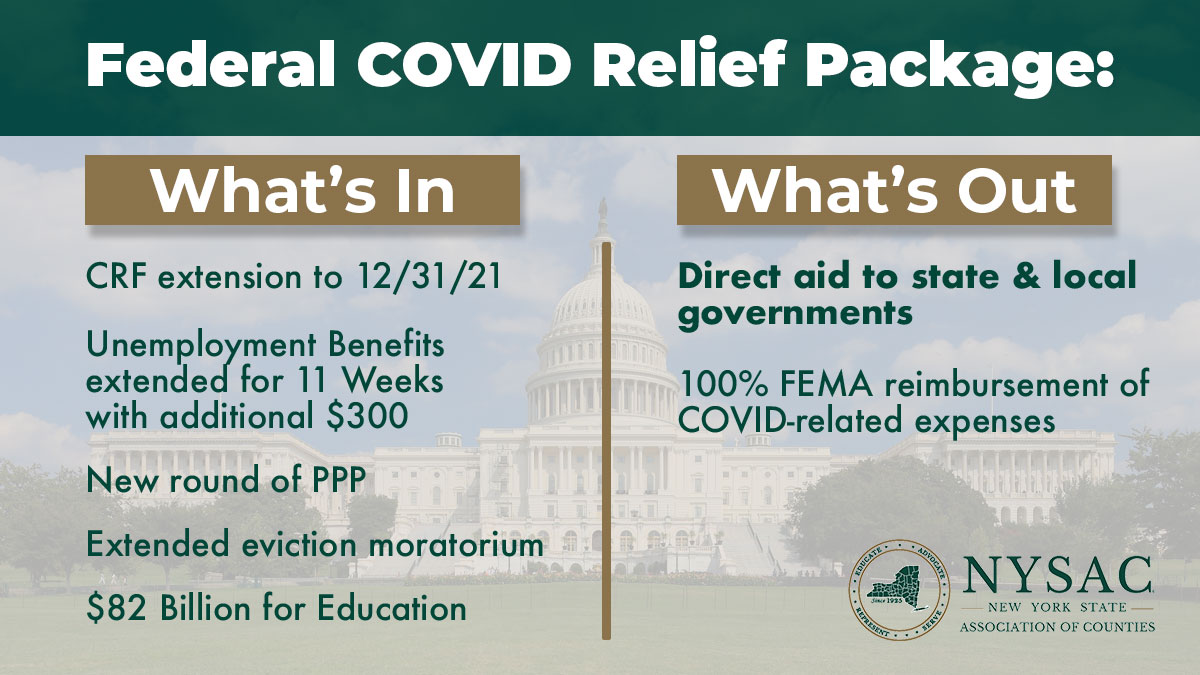 After months of negotiation, thousands of lives and livelihoods lost, and the emergence of a full-blown second wave, Congress finally struck a deal on a nearly $900 billion COVID-19 relief package. While the agreed upon legislation provides needed relief to families and businesses, it fails to provide direct, unrestricted aid to the states and county governments who have been leading the local response to the virus on the front lines.

This failure of federal government to come the aid of states and local governments in a time of national emergency is unprecedented in our history and places local governments in the direct line of fire from an economic triple treat: losses in sales tax revenue to the tune of $2 billion; cuts in state reimbursement which total more than $600 million and will grow as the state closes its $14 billion budget deficit; increases in the demand for social services like home heating, food stamps and meals on wheels.

Legislators were also unable to reach agreement on a provision to increase the federal FEMA match to from 75 percent to 100 percent. In the absence of direct aid to replace lost revenue due to COVID, counties were seeking increased support from the federal government to help offset costs associated with the pandemic. Though the package fails to provide a 100 percent match, FEMA may raise their reimbursement to 90 percent upon request of the Governor – an action we anticipate the Cuomo administration to take once President-Elect Joe Biden takes office.

In a positive development for counties, the package provides modest assistance to counties by extending the current Coronavirus Relief Fund (CRF) deadline until December 31, 2021. The CRF was established under the CARES Act and provides $150 billion in federal aid for states and counties with populations over 500,000 to address significant expenditures related to public health and safety needs. As established under the CARES Act, state and local CRF allocations was supposed to have be spent by December 30, 2020.

Other key items included in the relief package include

Funding for Testing
The agreement contains $69 billion for vaccine procurement and distribution, including nearly $9 billion to the CDC and states for vaccine distribution and more than $22 billion to states for testing, tracing and COVID mitigation programs. Of this total, $2.5 billion will be sent out as grants specifically targeted at needs in underserved areas, including both communities of color and rural communities.

Unemployment Benefits
Two expiring CARES Act programs, Pandemic Unemployment Assistance, which made benefits available to the self-employed and gig economy workers, and Pandemic Emergency Unemployment Compensation, which provided additional weeks of benefits, were extended for 11 weeks, averting a fiscal crisis for millions of Americans. In addition, Congress will add $300 to all weekly unemployment benefits, half the amount that supplemented benefits from April through July. Workers who rely on multiple jobs and have lost income will also be eligible for a weekly $100 boost as well.

Support for Small Businesses
The deal provides new funding to the Paycheck Protection Program, which provided distressed small businesses with forgivable loans to keep them afloat and avoid a laying off employees. Businesses that already received a PPP loan will be eligible to get a second one under the new terms. Some of the PPP funds will be set aside for the smallest businesses and community-based lenders.

Housing Assistance
The bill extends the eviction moratorium that is set to expire at the end of the year through the end of January. The legislation also includes $25 billion for rental assistance to families facing eviction. Eligible renters would be able to receive assistance with rent and utility payments, and bills that have accumulated since the start of the pandemic, by applying with entities that state and local grantees choose to administer the program.

Education
The bill includes several provisions relating to elementary, secondary and higher education. It would provide $82 billion in funds for schools and colleges to help them reopen classrooms and prevent virus transmission.

Though the final result of fell far short of what counties need, we truly appreciate the work of New York State's Congressional Delegation who fought tirelessly on behalf of the state and local governments. In the coming year, we look forward to continuing to work with them to secure additional resources to assist local governments as we continue to battle the pandemic and support our communities.