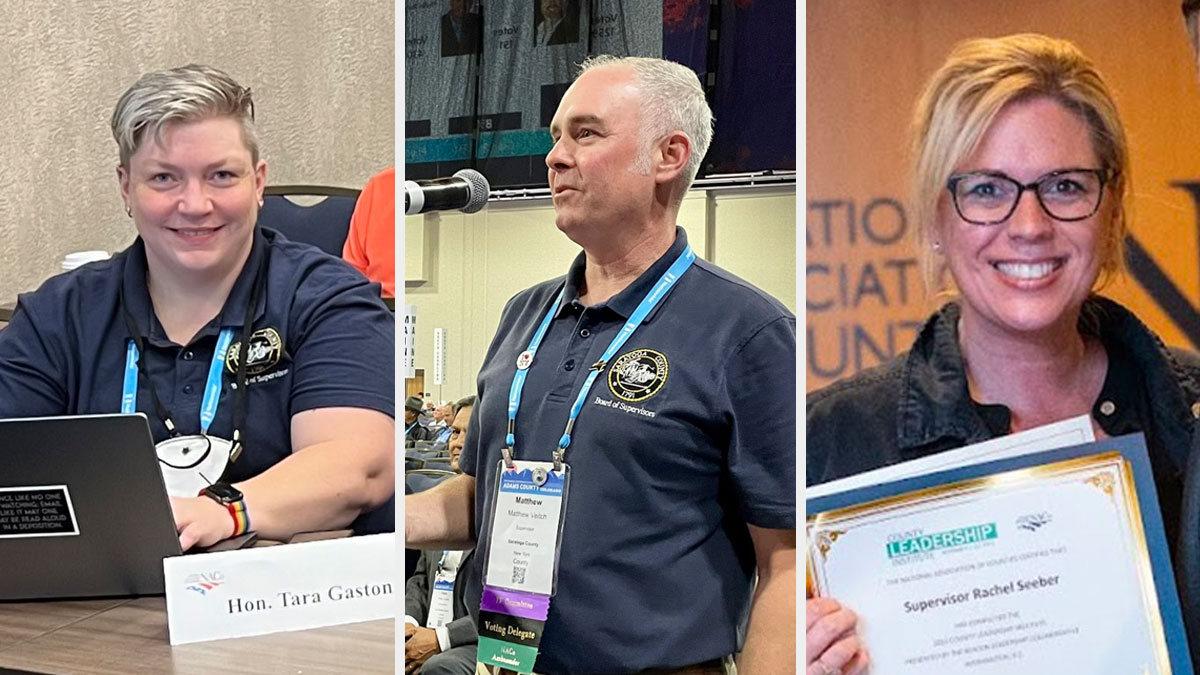 
“Whether it's addressing the climate crisis or caring for our veterans, counties are on the front lines of some of the most pressing public policy challenges of our time,” said County Supervisor Tara Gaston (Saratoga Springs). “I'm honored and excited to bring my passion for these issues to the national stage and work toward solutions at the federal level.”


“International trade, particularly with partners like Canada, is critical to our state and local economies,” said County Supervisor Matthew Veitch (Saratoga Springs). “As Chair of the NACo International Economic Development Task Force, I look forward to helping strengthen existing relationships and create new opportunities that are beneficial to New York businesses and consumers.”


“New York has been at the forefront of recent changes to public safety law, and it is critical that our voice be represented at the national level,” said County Supervisor Rachel Seeber (Queensbury). “One of the core functions of a county is to ensure public safety through our local jails run by our sheriffs, courts, probation departments, public defenders and  district attorneys.”


“New York's counties are on the cutting edge of innovation and leadership at the local level and have a wealth of insight to share with local leaders around the nation,” said NYSAC President Marte Sauerbrey. “I'm proud to see our Members be selected by the NACo leadership.  It is exciting to see NY members bring their creative vision and passion for local government and public service to NACo.”


The New York State Association of Counties (NYSAC), founded in 1925,  is an affiliate of NACo and works closely with the organization to advance priorities of New York's counties at the state and federal level.


“As counties across New York State work to rebuild from the pandemic and respond to new and challenges and opportunities facing local government, it's critical to have strong representation in the nation's capital,” said NYSAC Executive Director Stephen Acquario. “Having county officials from New York State helping to guide advocacy at the National Association of Counties (NACo)  will help build better and stronger counties in our great state and around the nation.”
###