Notes items that counties actively support or seek to change in the final Enacted Budget. 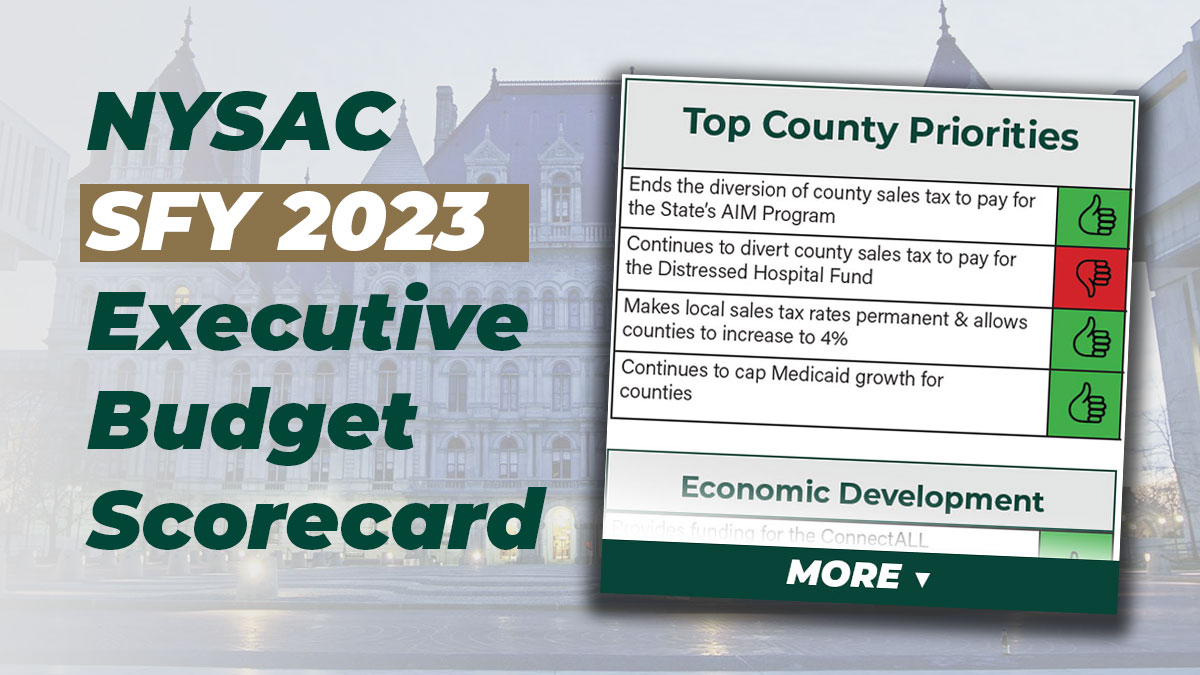 In the scorecard, counties noted they were encouraged by proposals that address key priorities, including permanency in local sales tax rates, ending the diversion of local taxes to pay for the State's AIM program, as well as significant investments in public health, support for veterans, and infrastructure.

It also flagged areas of concern, including the continued diversion of local sales taxes to support a distressed health facilities fund and increased Pre-K provider rates, which are needed but should not be funded by county taxpayers.

“The budget proposal laid out by Governor Hochul is a great first step in this process. It addresses many of our top priorities on issues of tax fairness and local control while also making long overdue investments in our local health departments, environment and infrastructure” said Marte Sauerbrey, NYSAC President and Tioga County Chair. “It also contains some things that were disappointing to see, like the continued diversion of local sales taxes to pay for a distressed hospital fund, which we will work with state leaders to remedy. Overall, this is a strong budget for local governments, and we look forward to working with the Governor and the state legislature to make it even stronger.”

“After battling a pandemic for two years, and a state vs. local mindset before that, local governments are relieved to see a new collaborative approach to crafting the state budget that is more inclusive to the needs of local government,” said NYSAC Executive Director Stephen Acquario. “While the Executive Budget contains some items of concern that we will seek to change in the coming months, it also delivers on a host of long-sought county priorities that will be a shot in the arm to the local governments that have been fighting to protect the health and economic prosperity of their communities for nearly two years. We thank Governor Hochul for her constructive partnership in this process and look forward to working with her to craft a final budget that moves our state forward.”

NYSAC is committed to communicating the needs and recommendations of county officials as State lawmakers negotiate the next year's spending plan. Learn more about the SFY 2023 State Budget and the impact on counties at www.nysac.org/nysbudget.