On February 9th, 2022, NYSAC appeared before the Joint Legislative Committee on Local Government. 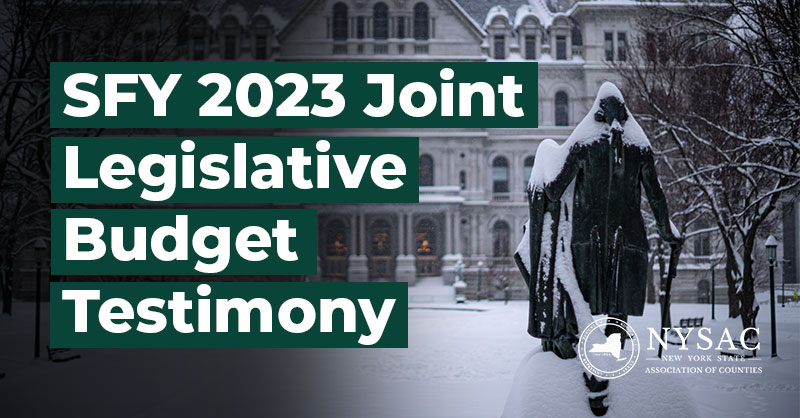 Introduction
Thank you for the opportunity to speak to the State Legislature's Joint Budget Committee on Local Government.

On January 18, 2022, Governor Kathy Hochul unveiled her SFY 2023 Executive Budget proposal. The budget calls for a record $216 billion in total spending including nearly $5.5 billion on behalf of counties outside of New York City through major local aid programs, including $2.5 billion attributable to the State takeover of local Medicaid growth.

Despite record spending levels, the budget is projected to remain balanced through 2027 while increasing state “Rainy-Day” reserves to 15% of State Operating Funds by 2025.

Overall Goals
The main goal for counties during this 2023 state budget cycle is to protect local taxpayers, preserve local services and programs, and promote the flexibility that local leaders need to continue to provide a quality of life that New Yorkers need, deserve, and want to stay in our communities and in our great state.

First let me say that counties are encouraged by proposals that address long-sought county priorities like providing permanency in local sales tax rates, ending the diversion of local taxes to pay for the State's AIM program, making significant investments in public health, and supporting veterans and infrastructure while also committing to use the state's strong fiscal position to build reserves for the future.

There are, however, areas of concern, including the continued diversion of local sales taxes to support a distressed health facilities fund and increased Pre-K provider rates, which are needed but should not be funded by county taxpayers. Counties look forward to working with all of you in the coming months to create a budget that supports local governments and the residents we serve.

Our top priority is keeping local taxes local to ensure maximum transparency and accountability to the taxpayer.

We know the Executive Budget Recommendation is the beginning of the process and based on fiscal plan updates over the last year we expect that the coming revenue consensus forecast will provide new revenues and avails that can be utilized to address some of the financing concerns we raise today.