Use the links below or scroll to view webinar details, PDFs, and recordings:

FEDERAL PERSPECTIVE: Federal update will discuss the Trump Administration plan on Medicaid. Amidst attempts to cut federal funding for the program in recent years, the Centers for Medicare and Medicaid Services’ (CMS) released the Medicaid Fiscal Accountability rule, a federal regulation that would make technical changes to Medicaid’s supplemental payments and state financing structure. In FY 2018, supplemental funding sources such as IGTs and CPEs, made up 37.5 percent of all Medicaid spending. If enacted, the proposed rule could impact how states and counties finance their non-federal share of the Medicaid program.

STATE PERSPECTIVE: New York State Proposes to realign the local Medicaid cap. Learn the latest on the state’s proposal to redesign Medicaid through the Medicaid Redesign Team (MRT) and proposals that will affect the New York Medicaid cap for county governments and New York City.

How to Access State Census Funding for Counties and Local Nonprofits

In December, the State announced funding allocations for counties that create complete count committees and develop plans to work with local nonprofit agencies to promote the completion of census questionnaires. Webinar for State leaders to explain how counties can apply for and receive the funding that was announced in December. They will also discuss how the local nonprofit agencies can be approved by the state to work within county plans and be eligible for funding.

Managing Disasters at the County Level: Resources for Flood Preparedness and Response

PFAS & Your Local Landfill: Managing Risk and Preparing for Regulations

Countdown to the 2020 Census Count

Preparing for Implementation: What the Election Law Reforms Mean For Your County

The Dairy Crisis and its Impact on NY Farmers


Managing Disasters at the County Level: Resources for Flood Preparedness and Response
December 18, 2019 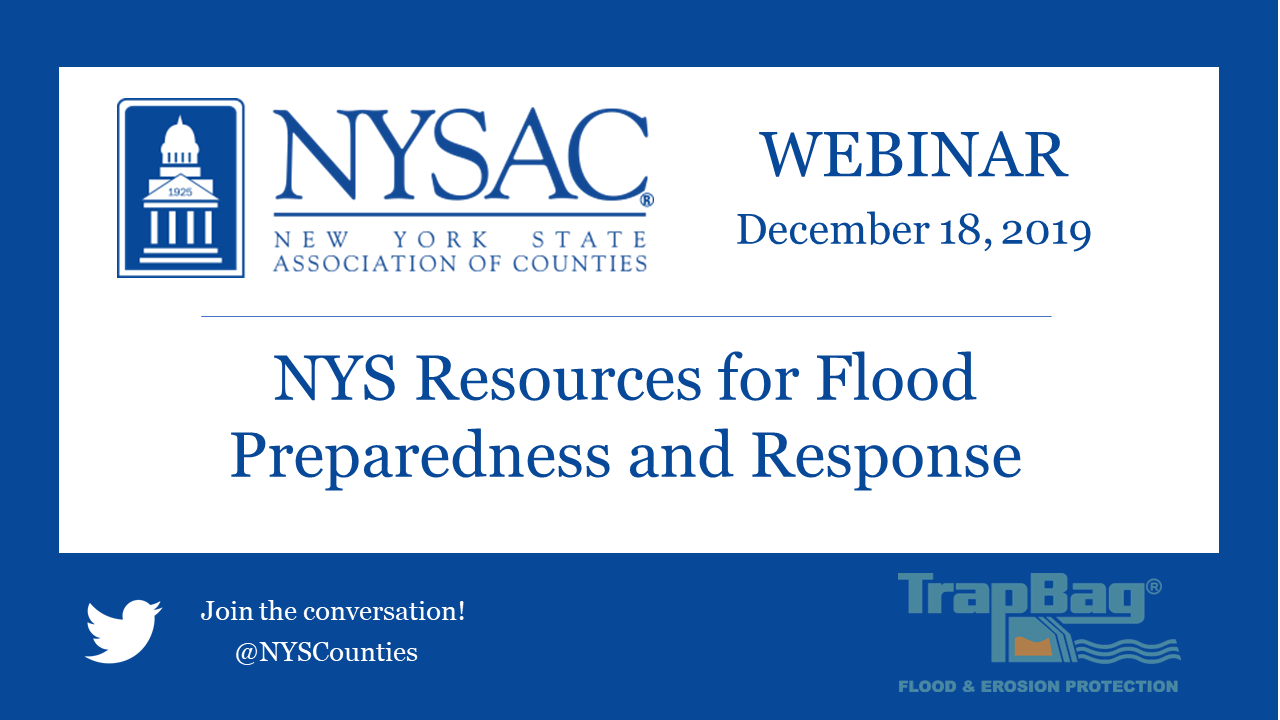 Flooding has had a profound impact on communities across New York State. According to Rebuild By Design, every county in the state has experienced a federal or state disaster declaration for flooding in the past ten years, and more than half experienced five or more events. Fortunately, state resources are available to assist county leaders and homeowners in responding to and recovering from significant flood events.

This webinar hosted Jefferson County Chairman Scott Gray, and the Governor’s Director of Emergency Management Michael Kopy and Assistant Secretary for Intergovernmental Affairs Molly Reilly to discuss state funding and other resources available to prepare communities for the next storm and rebuild in the aftermath.

PFAS & Your Local Landfill: Managing Risk and Preparing for Regulations

In recent years, there has been a new focus on groundwater contamination and the threat unregulated contaminants pose to the safety of our drinking water. New York State is now in the process of adopting the nation’s most stringent drinking water standards for an emerging family of contaminants, known collectively as PFAS, that has been found in the public water supply throughout New York State. These “forever chemicals” bioaccumulate in humans and have been linked to several types of cancer and other debilitating diseases. While PFOA and long-chain PFAS chemicals are no longer found in new U.S. products, they are still found in landfills around the country, creating an ongoing threat of contamination into the environment through landfill leakage. As public interest in PFAS continues to rise, we can expect to see new monitoring requirements and legislation in order to safeguard our communities, as well as increased litigation.

A lack of accessible financing is often a barrier to making clean energy upgrades, however with Open C-PACE property owners benefit from competitive rates from approved capital providers and terms that can match the life of the improvements, generally 20-30 years. These factors make Open C-PACE a unique tool for building owners, whether they need to upgrade outdated building equipment or want to include deep energy retrofits as part of a property’s redevelopment.

Countdown to the 2020 Census Count

Complete count committees across the state are meeting and making plans to put together an infrastructure that will work to ensure every New Yorker gets counted in the 2020 Census. From appealing the Local Updates to Census Addresses (LUCA) to complete count committees, many counties and local governments are partnering with community agencies to educate and inform the public about the importance of being counted.

Food waste is a global problem with far-reaching impacts on food security, resource conservation, and climate change. Roughly one third of the food produced for human consumption worldwide — approximately 1.3 billion tons — gets thrown out every year.

The 2019-20 NYS Budget includes legislation to address this problem by requiring the largest generators of food scraps to donate their excess food and recycle food scraps.

This NYSAC webinar breaks down the legislation and shares resources for counties that are interested in being part of the solution. Listen to learn how New York’s counties are helping to divert food from landfills and incinerators and what changes your county’s supermarkets, universities, hotels, and other designated food scraps generators will be preparing for in the lead up to January 1, 2022.

Local Emergency Medical Services (EMS) organizations are having a harder time staying operational, particularly in more rural parts of the state. This webinar will discuss how one county is working to develop countywide cost-effective EMS system that is responsive to consumer needs. This system is designed to help equalize the cost among all residents of the County for the delivery of this service, while giving it greater stability and accountability through a better governance structure.

In March 2020, New York will become the second state - behind California - to implement a ban on single-use plastic bags. Counties will also have the option to opt-in to a $0.05 fee on paper bags. What does this mean for your county? Listen to the webinar recording (below) to learn more about the legislation and how stakeholders across the state are preparing for its implementation.

Preparing for Implementation: What the Election Law Reforms Mean For Your County

This webinar examined the election law reforms that were passed during the 2019 NYS legislative session. Presenters covered the perspective from the state board of elections and local boards of elections as implementation of the reforms gets underway. Topics  included electronic poll books, early voting, the revised political calendar and an overview of the election laws that have been passed by the legislature.

October 30, 2018
A webinar training on the on the recently adopted regulations that formed the New York State’s Department of Labor (“DOL”) model sexual harassment prevention documents for all employers.
This complex change in the law required all employers, including county governments, to update and create new sexual harassment policies and procedures. Our labor experts will walk you through the changes in the State law and what you will need to know as employers, employees and as county government leaders.

The Dairy Crisis and its Impact on NY Farmers

This online video presentation addresses the dairy crisis from four critical perspectives: the USDA, a financial lender, a processor, and a farmer.